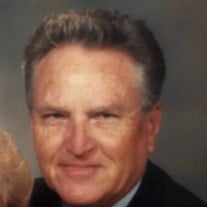 Alfred J. Collom, 93 years of age, of Winters, Texas, passed away in his home on May 8, 2019. Family Visitation will be held from 5:00 to 7:00 p.m. on May 10, 2019, at the First United Methodist Church in Winters. The funeral service will be held at 11:00 a.m. on May 11, 2019, at the First United Methodist Church in Winters. Reverend Samantha Chambers, minister of the First United Methodist Church, and Reverend Georgia Orr, former minister of the First United Methodist Church in Winters will be officiating. Burial will follow at the Crews cemetery. Funeral arrangements are being handled by the Winters Funeral Home. Alfred, known as Al or A.J., was born in Crews, Texas on March 7, 1926, to Courtney and Delia Keton Collom. Al and his three siblings were raised on their family farm in the Crews Community where the children attended Crews schools. Al graduated from the Crews High School and with World War II going on, following graduation he joined the U.S. Navy. The Navy sent Al to California for Naval boot camp. While at boot camp, the Navy tested Al and sent him back to Texas to attend radio operator training at Texas A&M. While at radio school Al was once again tested and selected to attend Navy Pilot V12 Training, at some time in the future. After completion of radio school Al’s assignment was Radio Man 3rd Class on the USS Pittsburg, a Heavy Cruiser in the 8th Fleet. During World War II the Pittsburg fought in two battles, one in Okinawa and one in Iwo Jima, earning two Battle Stars. World War II ended therefore, Al never got the opportunity to attend Navy Pilot V12 Training. Following the War, Al entered Southern Methodist University, under the G.I. Bill. Al majored in Mathematics and Minored in Physics but prior to graduation, Al ran out of money so he took a semester off and went to work for a geophysical company. That company sent him to work in Winnfield, Louisiana. While working in Winnfield, a “cupid” introduced Al to the love of his life, Jessie Kennedy. Jessie, who had already graduated from Louisiana Tech, had a full time Federal job and also worked nights teaching in a business school. And, Al always said, “and she had her own car!” A loving relationship began that would last over 70 years! Al made enough money to return to SMU and graduate with a Major in Mathematics and a Minor in Physics. Following graduation, Alfred J. Collom and Jessie Irene Kennedy were married in Winnfield, Louisiana on March 4, 1950, and Al moved Jessie off to Dallas, Texas. Al worked as an engineer for a company before landing a job with General Electric building satellites. Al’s experience working on satellites opened the door for him to go to work at the National Aeronautics and Space Administration in Houston, later called NASA’s Johnson Spacecraft Center. Al worked on the Apollo missions, including putting a man on the moon, then Al worked on the Space Shuttle missions until retirement. Al’s work at NASA kept him travelling around the country for many years, and his bride, Jessie, worked in NASA’s Office of the Director and later in the Accounting Department of NASA. Al and Jessie rode to work together and went to lunch together almost every day, like two best friends would do. Along the way Al and Jessie had two children, Keith and Larry. As adults, both Keith and Larry lived in the Crews Community and were in the cattle business. Upon retirement, Al and Jessie retired to a farm at Crews they had purchased years earlier and joined their sons in the cattle business. After years living on the farm, they purchased and moved into a house in Winters, where they lived until Al passed away. Alfred is survived by his spouse, best friend, and partner of sixty-nine years, Jessie Collom, two sons, Keith Collom and wife Lisa of Abilene and Larry Collom and wife Bobbie of Crews, granddaughter Amanda Collom and husband Mike Hoten of Ballinger and two great grandchildren Blake and Bailey Collom of Ballinger, and great granddaughter Taytem Davis of Sterling City, and numerous nieces and nephews. Al is also blessed to be survived by grandchildren Scott Stone and wife Shelly, Darcy Carlisle and husband Scott, Kinzee Willis and husband Evan, Kenedee Latham and husband Mason, Gage Reeves, great grandchildren Tyler Stone and wife Whitney, Brad Stone and wife Kara, Jason Stone and wife Taylor, Zachary Carlisle and fiancée Amanda, Blake Hoten, Autumn Hoten, Jax Willis, and Leighton Willis, great great grandchildren Reagan, Chandler, Gideon, Ainsley and Knox Stone. Alfred is preceded in death by his parents, Courtney and Delia Collom, siblings Gladys Cotton, Glenna Barnett, and Howard Collom, grandson Courtney Collom, and numerous nieces and nephews. In lieu of flowers memorial donations may be made to the Loeys-Dietz Syndrome Foundation (LDSF).

The family of Alfred Jerome Collom created this Life Tributes page to make it easy to share your memories.