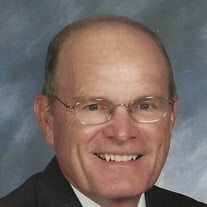 Billy (Bill) Thomas Shoemake, 79, passed away July 17, 2021, at his home in Abilene, Texas. Bill's devotion to his family and strong Christian faith were at the forefront of his daily life. He was kind and thoughtful to all he met. We hold cherished memories of his love, his kindness, and his ability to make others laugh. His integrity and wisdom were anchors for others to rely upon. Bill was born May 18, 1942, in Commerce, Texas, to BT and Velma Shoemake. Bill graduated from Winters High School in 1960. He went on to pursue a degree at Texas Tech University in Lubbock, graduating with a degree in finance in 1964. He was married to LuAda England Shoemake, the love of his life and best friend, for 61 years. Together they raised two sons, Tom and Mike, both of whom grew to emulate their dad in kindness, wisdom, and humor. The majority of Bill's career was spent in Houston, Texas, where he worked for Mitchell Energy and Development Corp. He was an integral part in the company's primary real estate project, the development of The Woodlands community. Bill and Lu lived in The Woodlands until he retired, and they moved to Abilene in 2001. Bill is survived by his wife Lu of Abilene, his son Michael and wife Amy of Austin, his brother Bob and wife Diane of Richmond, Virginia, his sister-in-law Gail Shoemake of Amarillo, his grandchildren Bret Shoemake and wife Brittany, Clint Shoemake and wife Ji, Ashley Shoemake and Lauren Shoemake, and great-grandchildren Beau, Ava Jane, Theo and Madeline as well as several nieces and nephews. He is preceded in death by his parents, his son Tom Shoemake, his sister Betty Shoemake Johnson, and his brother Ben Shoemake. A private family burial service will be held at a later time. Pallbearers will be Bret Shoemake, Dennis Riddle, Lanny England, Loren England, Luke England and Mickey Winter. In lieu of flowers, the family requests that memorials be made to your favorite charity.

Billy (Bill) Thomas Shoemake, 79, passed away July 17, 2021, at his home in Abilene, Texas. Bill's devotion to his family and strong Christian faith were at the forefront of his daily life. He was kind and thoughtful to all he met. We hold cherished... View Obituary & Service Information

The family of Billy Thomas Shoemake, Jr created this Life Tributes page to make it easy to share your memories.