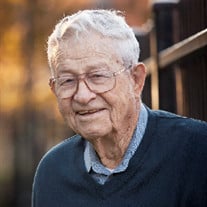 C. R. Dean was born in Wingate, Texas on March 28, 1922 to parents Roland Ray and Nina Lorena Dean (Gannaway). He passed away Wednesday, July 4, 2018 at The Ballinger Healthcare and Rehabilitation Center. He was 96 years of age. C.R. married Ora Lee Hancock, the love of his life, on October 20, 1948 in San Angelo, Texas. They were married over 61 years when she preceded him in death March 29, 2010. C. R. is survived by: his two sons Johnny Ross Dean and his wife Diane of Edmond OK, Tommy Lee Dean and his wife Faye of Winters, TX, 9 grandchildren, 10 great grandchildren, his sister Margaret Bodine of New Braunfels, TX and his brother Hollis Dean of Wingate, TX. He was a Baptist and member of the Wingate Baptist Church. C.R. Dean had a strong sense of duty and responsibility, and was a member of the “Greatest Generation”. When the nation entered World War II, he, three brothers and a brother-in-law entered military service. C.R. joined the Army Air Force and served in the southwest Pacific, flying 43 missions as an aerial gunner. For his service he was awarded the Air Medal with two oak leaf clusters, the Good Conduct Medal, the American Defense Ribbon, the Asiatic-Pacific Ribbon with 2 battle stars and the Philippines Liberation Ribbon with one battle star. He was discharged at the rank of staff sergeant in 1945 and subsequently served three years in the Air Force Reserves, discharged in 1948. After the war C. R. worked primarily in the oil fields of West Texas. His strong work ethic and diligence allowed him to literally rise through the ranks from roughneck to part owner of a drilling company and the position of Senior Vice President of Drilling Operations for D-B Drilling Company. Traveling with him to the field in summers and on weekends allowed his two young sons a great opportunity to learn many great lessons about life, dedication, work ethic and the business. C.R was a member of the Masonic Lodge 1042 in Wingate, Texas, the Lubbock Scottish Rite, and the Suez Temple A.A.O.N.M.S. In 2018 he was honored by the Grand Lodge of Texas for sixty-five years as a Master Mason. In lieu of flowers donations in his memory can be made to the Shriner’s Hospital for Children. Visitation will be from 5:00 til 7:00 PM, Tuesday, July 10, 2018 at the Winters Funeral Home. Funeral services will be held at 2:00 PM, Wednesday, July 11, 2018 at the Wingate Baptist Church, with burial at the Wingate Cemetery.

C. R. Dean was born in Wingate, Texas on March 28, 1922 to parents Roland Ray and Nina Lorena Dean (Gannaway). He passed away Wednesday, July 4, 2018 at The Ballinger Healthcare and Rehabilitation Center. He was 96 years of age. C.R. married... View Obituary & Service Information

The family of Clarice Ray Dean created this Life Tributes page to make it easy to share your memories.