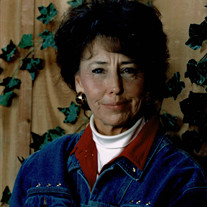 On October 17, 2020, Josephine Dianne Davis passed from this life. Dianne will always be remembered as a loving Mother, D.D., and Friend. Dianne was born on September 19, 1939 in Winters, Texas to Floyd Sims and Halley Sims. She grew up in Winters, Texas where she graduated from high school in 1958. She is survived by one son, Tommy Sims Davis and wife Monnie Davis of Winters, Texas; one grandson, Don Addison Davis and special friend Sarah Burt; one great-granddaughter, Addison Marie Davis; one brother, John Sims; two nieces and a nephew. She was preceded in death by her brother Tommy Sims. A 1958 graduate of Winters High School, she was chosen as a Texas All Star by the Texas High School Girls Coaching Association and played In an exhibition game in Huntsville. Dianne attended the University of North Texas in Denton on a full basketball scholarship, graduating with a Bachelor’s degree in Elementary Education in 1962. She also attended Texas A&M University earning a degree in Early Childhood Education, and received her Master’s in 1967. Dianne taught one year in Decatur, Texas and one year in Newark, Texas. She moved back to Winters in 1964 and began her teaching career and taught first grade for 20 years and then moved to kindergarten for the last 20 years of her career. Dianne touched hundreds of lives through her career of teaching kindergarten and first grade. She was very proud of the fact that she taught three generations of children. After retirement, she continued to care for her cattle, cats and dogs. Dianne treated everyone and everything like it had feelings, whether people, animals, trees or plants. Dianne has been crowned Coming Home Queen, served as president for the Friends of the Senior Citizens of Winters, and was a member of St. John’s Lutheran Church where she taught Sunday School and served as treasurer. Graveside services will be held at 2:00 p.m. on Sunday, November 1, 2020 at Fairview Cemetery with Pastor Al Brakke officiating. Memorials may be made to the Winters Public Library, Rock Hotel, or any animal rescue organization.

On October 17, 2020, Josephine Dianne Davis passed from this life. Dianne will always be remembered as a loving Mother, D.D., and Friend. Dianne was born on September 19, 1939 in Winters, Texas to Floyd Sims and Halley Sims. She grew up in Winters,... View Obituary & Service Information

The family of Dianne Davis created this Life Tributes page to make it easy to share your memories.