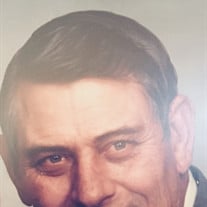 Elton Ray “Tuffy” Smith, age 80, passed away on December 24, 2018. A graveside service will be held at Lakeview Cemetery in Winters, Texas on Friday, December 28, 2018 at 11:00 a.m., with Brother Barry Taylor officiating. Visitation will be 6:00 p.m. Thursday, December 27, 2018 at the Winters Funeral Home. Elton Ray Smith was born February 5, 1938 in Winters, Texas to Vada and Rufus Smith. He grew up in Drasco and Winters and the surrounding areas. He graduated from Winters High School in 1957 and true to his nickname, he attended Cisco Junior College on a football scholarship. As a young man, he worked in the mining industry in New Mexico. Later, he went to work for Dow Chemical in the Powerhouse in Brazosport, Texas. He retired from Dow after 30 plus years of service and moved back home to Winters in 1995. He married Marlene Smith in Winters on June 12, 1976. He was preceded in death by his parents and his oldest son, Elton Reed Smith, brothers Donald and J.W. Smith, and sisters Pauline Proctor and JoAnn Harlan. He is survived by his wife of 42 years, Marlene; his son, Mort Smith and wife Barbara, of Katy, Texas, his grandson Curtis Smith and granddaughter Callie Smith; his brother-in-law, Don Harlan; several nieces and nephews; step-sons Tracy O’Connor and wife Diana, Stuart O’Connor and wife Margaret, Brian O’Connor, Doug O’Connor and wife Vicky and a host of step-grandchildren and great-grandchildren that all called him Pampaw. Elton was an avid sportsman and an excellent marksman. He loved to fish and to hunt deer, quail and dove all over Runnels County. One of his favorite pastimes was to drive around with his son Mort and grandson Curtis looking for good fishing holes and hunting spots. He spent many happy days with his beloved yellow lab, Tillie. He also enjoyed playing dominoes with his buddies at the domino hall in the Winters. He was also a shrewd card player and enjoyed winning. Elton was a wealth of knowledge for all things mechanical and he also had a green thumb and was a skilled Burket pecan cracker. His friendly smile and good sense of humor will be missed.

The family of Elton Smith created this Life Tributes page to make it easy to share your memories.