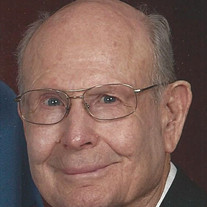 Eugene Forrest Carter, 92, went to be with his Lord on July 1, 2018 at the Buckner Westminster skilled nursing facility in Longview, Texas. Forrest was born November 28, 1925 near Roby, Texas, the son of Dora Josephine (Jo) (Hodges) and George Hutchings (Hutch) Carter, Sr. The Carter and Hodges families were pioneer residents of Fisher County. His parents and three brothers, George H. Jr, Robert Don, and Jimmie Dale all preceded him in death. Forrest professed his faith in Christ at the First Baptist Church, Roby, as a child. He met Margaret Williams at First Baptist Church, Abilene, and they were married on May 22, 1954. She preceded him in death in 2015 after 61 years of marriage. To this union were born two sons, Mark (wife Jo) of North Richland Hills and Greg (wife Tammy) of Longview. After graduating from Roby High School in 1944, Forrest earned a Bachelor of Science degree in Electrical Engineering from Texas Tech University in 1949. Forrest worked for West Texas Utilities in Abilene for 41 years, from June 1949 until his retirement on December 1, 1990. He held numerous engineering positions including Cadet Engineer, Junior Engineer and Engineer in the Transmission Department for WTU, Substation Design Engineer, and Manager of Substation Engineering for the last 13 years of his career. Forrest became a registered Professional Engineer in Texas in 1963 and maintained his registration on an inactive basis after his retirement until his death. He was recognized by the Texas Board of Professional Engineers in 2014 as having been a Professional Engineer for over 50 years. In 1985 Forrest was honored by the Abilene Jaycees as Boss of the Year. His professional memberships included: the Abilene Toastmasters Club, Texas Society of Professional Engineers, and the Institute of Electronic and Electrical Engineers, where he served as chairman, vice-chairman, and secretary-treasurer of the West Texas chapter. Margaret and Forrest were long-time members of First Baptist Church, Abilene, where he served as a deacon and children’s Sunday school teacher. They served for many years after his retirement from WTU at the FBC Family Life Center and later at FBC’s Big A Club ministry to children and City Light ministry to the homeless. They were also members of the Fisher County Historical Society and the WTU Retirees Club. Forrest and Margaret enjoyed travelling during their retirement years, researching family genealogy, and visiting family. He is survived by his two sons and their wives, five grandchildren, Meggie Holland (husband Ryan) of North Richland Hills, Camille Drenner (husband Cooper) of Austin, Caleb Carter (fiancé Elizabeth Bradford) of Dallas, William Carter of Baytown, and Austin Carter of College Station; three great-granddaughters, Charlotte, Elizabeth, and Margaret Holland, one great grandson, Henry Drenner; and sister-in-law Sue Carter of Wimberly, in addition to numerous nieces, nephews, and cousins. Visitation will be held at 10:30 on Thursday, July 5 at the First Baptist, Abilene chapel, followed by a celebration of his life at 11:00 AM in the chapel. A graveside service will be held at 2:30 at the Northview Cemetery in Winters. Rev. Benny Mayo, Margaret’s cousin, will officiate. Grandsons and grandsons-in-law will be pallbearers. In lieu of flowers, memorial gifts may be made in Forrest’s memory to the American Cancer Society or to Buckner International with a designation to the Buckner Westminster Place Senior Care and Assistance Fund. The family is especially appreciative of the loving staff at Buckner Westminster Place in Longview that cared for Forrest over the last three years of his life.

Eugene Forrest Carter, 92, went to be with his Lord on July 1, 2018 at the Buckner Westminster skilled nursing facility in Longview, Texas. Forrest was born November 28, 1925 near Roby, Texas, the son of Dora Josephine (Jo) (Hodges) and George... View Obituary & Service Information

The family of Eugene Forrest Carter created this Life Tributes page to make it easy to share your memories.