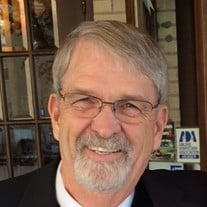 Larry Bob Prewit, 70, of Winters, Texas rode off on his Harley to his final Heavenly adventure Tuesday, April 13, 2021. He was born in Stamford, Texas to Eugene and Doris Prewit. Bob married his high school sweetheart, Sue Hoppe, August 26, 1972 at St. John's Lutheran Church. He grew up in Stamford, Rule, Abilene and Winters. He graduated Winters High School. Bob attended Angelo State University. He graduated Eastfield College and Baylor University Medical Center School of Radiology Technology. While living in Dallas, he worked at Baylor University Medical Center. After returning to Winters to raise children in a small town and close to all grandparents, he worked at Winters Farm Equipment and North Runnels Water Supply Corporation. After a few short years, he returned to serve in the medical field. He was Hospital Administrator for North Runnels Hospital District. Prior to retiring in 2019 from fulltime work at Hendrick Health Systems, he held Director and Vice President administrative positions for 26 years. He continued to serve as consultant until 2020. Bob was a member of Winters Chamber of Commerce, Winters Lions Club, Winters Junior Livestock Association, and Winters Booster Club. He was a volunteer fireman for Winters Volunteer Fire Department. He was a member of Winters Young Farmers where he received the Farm and Ranch Manager Award from Young Farmers Area IV. Bob served on Winters Independent School Board for 19 years, serving as President many of the 19 years. He served on committees and boards of Winters Country Club and First Abilene Federal Credit Union. He was a longtime supporter of Children's Miracle Network - Abilene. Bob was a baptized member of St. John's Lutheran Church where he had served on the Church Council. He was preceded in death by his parents Gene and Doris and his brother Charles Prewit. He is survived by his wife of 48 years Sue Prewit of Winters; children: Jennifer Prewit Bean and husband Jon of Ballinger, and Michael Prewit and wife Sara of Lubbock; brother Carl Dennis Prewit and wife Janice of Portland, Texas; grandchildren: Olivia Bean, Jessica Bean, Luke Bean, Kailynn Prewit, and Christian Mata; as well as multiple aunts, uncles, nephews and nieces. Bob was the proud husband, father and PaPa of his children and their families. Sue will truly miss the "Love of her Life". He was always ready to share a story about his "kids" and grandkids. He will be missed by his Harley friends on their travels to Sturgis. The family would like to express their appreciation to Hendrick Hospice. Visitation will be held at 10:30 a.m. Saturday, April 24, 2021 at St. John's Lutheran Church prior to the memorial and celebration service at 11:00 a.m. Saturday, April 24, 2021 at St. John's Lutheran Church under the direction of Winters Funeral Home. The family requests memorials be made to Children's Miracle Network - Abilene, Hendrick Hospice, or St. John's Lutheran Church.

The family of Larry Bob Prewit created this Life Tributes page to make it easy to share your memories.

Larry Bob Prewit, 70, of Winters, Texas rode off on his Harley...