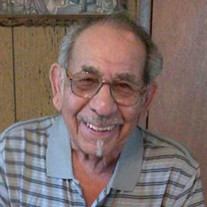 Louis N. De La Cruz, born September 12, 1928, passed from this Earth on January 11, 2020 to enter the Kingdom of his Heavenly Father to join hands once again with his beloved wife, Rosie De La Cruz, in Eternal Heaven. Preceding him in death are parents Evaristo and Inocensia, brothers Pete and Daniel, and sister Esperanza. He is survived by brother Jose of Winters, TX., Raul of Aubrey, TX. and sister Susie of Coleman TX. Louis was born in Howard County, Texas to Evaristo and Inocensia De La Cruz and the family moved and settled in Runnels County and later moved to Winters, Texas where he attended school. He later joined and proudly served in the U S Air Force from 1947 -1951 where he rose to the rank of Sergeant where he so proudly became crew leader on the right wing engine bank on the B-29 Superfortress during the Korean Conflict. Louis was proud to have served in Office for the VFW and American Legion where he was a long time member. He was a true Patriot American. He married the love of his life, Rosie Cortez, who had waited for him while he served and had five children who survive him: Louis of Odessa, TX with wife Alice and children Ray, Brenda, Ruben and Krystal and great-granddaughter Avianna, Fred of Granbury, TX and wife Carolyn and children Shelly, Shane, Nathan and Camille, Florinda of Austin, TX with son James, Albert of San Angelo and wife Maggie with children Daniel, Lilly, and Deana of Brownwood, TX with husband Butch and children Chase, Sheana, Willie, and Krista, and several great-grandchildren, nieces and nephews and extended family and the many friends he leaves behind. Mr. Louis N De La Cruz you leave behind many cherished memories and moments and you will not be forgotten! Viewing is at Winters Funeral Home with Rosary to be held on Tuesday, January 14, 2020 at 6:00 pm. Mass of Christian Burial will be held at 2:30pm Wednesday, January 15, 2020 at Mt. Carmel Catholic Church in Winters, TX and burial at Lakeview Cemetery. The family would like to extend a special thanks for the loving care and support of his caregiver, Saffron Davis.

Louis N. De La Cruz, born September 12, 1928, passed from this Earth on January 11, 2020 to enter the Kingdom of his Heavenly Father to join hands once again with his beloved wife, Rosie De La Cruz, in Eternal Heaven. Preceding him in death... View Obituary & Service Information

The family of Louis Noe De La Cruz created this Life Tributes page to make it easy to share your memories.