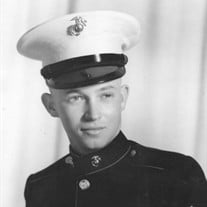 Melvin Ray Williams, 90, of Winters, Texas, passed away on Thursday, March 17, 2022, in San Angelo. Melvin was born on June 16, 1931, in the Baldwin community near Winters to A.T. and Mabel Williams and was a life-long resident of Winters until his illness. He was a member of the Drasco Baptist Church and served as Sunday School Superintendent, Sunday School Teacher, and Treasurer for many years. Melvin attended schools at Baldwin and Winters. As a junior in Winters High School, he was awarded the Lone Star Farmers award, the highest Future Farmers of America award in the State of Texas. Melvin was a member of the 1947 Class of Winters High School, graduating at the age of 15. After graduation, Melvin achieved his dream of serving his country. In 1950, the Korean War began, and he volunteered for the United States Marine Corps. He was selected to join a special Marine group of 100 other young men from Texas called the North Texas Infantry Company. He was stationed at the Marine Corps Recruit Depot in San Diego, CA. During recruit training, Melvin received an honor badge for making the best grade in his platoon, as well as the Sharpshooter and Expert Rifleman badges. Before departure to Korea, he was one of three men chosen from his group of 70 to attend Camp Lejeune Auto School in North Carolina. He served in combat in Korea and was awarded several combat medals. When not involved in combat action, he was assigned to military vehicles, including tanks and airplanes. Melvin was a member of the 1st Marine Division and 1st Marine Airwing and was promoted to Sergeant during his enlistment with the Marine Corps. After his active service in the Marine Corps, Melvin returned to Winters. He married Patricia Robertson, also from Winters, on August 13, 1955, at the First Baptist Church. They devoted themselves to raising their three children and continuing the Williams family legacy of farming and ranching in Runnels County, being recognized as an Outstanding Farm and Ranch Family of the Year by the Texas Soil Conservation District. Melvin was an avid collector and was well-known for his professional restoration of all types of antiques. Along with their farming, Melvin and Pat operated their antique business, Covered Wagon Antiques, and exhibited at glass and antique shows throughout Texas. Melvin was an active community member of Winters, serving on the Board of Directors of the Winters State Bank. He was a member of the Runnels County Historical Society and contributed articles of Winters and Runnels County history to the Winters newspaper. He was preceded in death by his wife, Pat; his parents; his sister, Adalene Stathem; his son-in-law, Stan Tatom; his grandson, Travis Armstrong; and many other beloved family members. Melvin is survived by his son, Douglas Williams of Winters; his daughters, Sheila Fox of Winters and Susan Armstrong and husband Bill of San Angelo; grandchildren, Allyson Fox and husband Jeff Stromberg, Andrew Williams, Blair Armstrong, and Amanda Williams; sister-in-law, Charlotte Barker; brother-in-law, Eugene Robertson; and numerous nieces, nephews and many other family members and friends. The family of Melvin Williams is grateful to Meadow Creek Nursing Home, Central Texas Nursing Home, and Shannon Medical Center for their loving care during Dad's illness. Graveside service will be held on Wednesday, March 23, 2022, at 3:00 p.m. at the Lakeview Cemetery in Winters under the direction of the Winters Funeral Home. Pallbearers will be Douglas Williams, Andrew Williams, Bill Armstrong, Blair Armstrong, Jeff Stromberg, Mike Davis, and Lane Stathem. Honorary pallbearers will be the living members of the 1st Marine Division Association. Memorials may be made to a charity of choice.

Melvin Ray Williams, 90, of Winters, Texas, passed away on Thursday, March 17, 2022, in San Angelo. Melvin was born on June 16, 1931, in the Baldwin community near Winters to A.T. and Mabel Williams and was a life-long resident of Winters until... View Obituary & Service Information

The family of Melvin Ray Williams created this Life Tributes page to make it easy to share your memories.

Melvin Ray Williams, 90, of Winters, Texas, passed away on Thursday,...