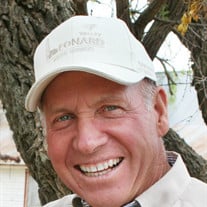 Michael Lynn Deike, 74, of Winters, Texas ran home into the arms of Jesus on Wednesday, May 5, 2021. On February 21, 1947 Michael was born to parents Fritz and Ethel Truman Deike. His love for farming, family, and the Lord would continue to grow as he became the man that God had intended him to be. He graduated from Winters High School and would go on to become a proud member of the fightin' Texas Aggie class of 1969 with a Bachelors of Science Degree in Plant and Soil Science. Upon graduating, Michael moved to San Antonio before eventually settling down back in Winters in 1975. It was here that Michael would live, work, and raise his family until he eventually moved to College Station, Texas in 2016. Michael Deike was an incredible father and man of the Lord. A lifetime member of the Lutheran Church, Michael spent many hours investing in his community and pouring into others. He lived his life intent on showing others love and being a selfless servant to those around him. This is exemplified through his years serving on the Church council of St. John's Lutheran Church, his leadership in Sunday school, and his consistent invitations for people to come into his home. Michael loved hosting picnics and young couples volleyball games, which were accompanied with Bible studies. He lived a full life by getting to have these experiences and also the joy of raising his three children, Kimberly, Kristin, and Mark. He was preceded in death by his parents Fritz and Ethel Truman Deike. He is survived by his children: Kimberly Widner and husband Steve Widner of Tulsa, Kristin Baxter and her husband Gary Baxter of Plano, and Mark Deike and his wife Vickie Deike of College Station; grandchildren: Carley Widner, Jack Widner, Cash Widner, and Sloan Widner of Tulsa, Mason Baxter and Joel Baxter of Plano, and Fritz Deike and Miley Deike of College Station; former spouses: Mitzie Deike and Sue Barr Deike; siblings: Jerrye Carey of Potosi and Edwin Deike of Winters; as well as multiple aunts, uncles, nephews and nieces. Michael's family has great peace and comfort knowing that he is rejoicing in the presence of God. Visitation will be held at Winters Funeral Home on May 11th at 6:00 p.m. followed by a celebration service that will be held at St. John's Lutheran Church in Winters, TX at 10:30 on May 12, 2021.

Michael Lynn Deike, 74, of Winters, Texas ran home into the arms of Jesus on Wednesday, May 5, 2021. On February 21, 1947 Michael was born to parents Fritz and Ethel Truman Deike. His love for farming, family, and the Lord would continue to... View Obituary & Service Information

The family of Michael Deike created this Life Tributes page to make it easy to share your memories.