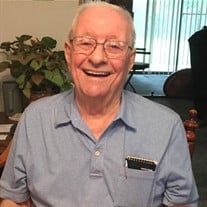 ** UPDATE** A memorial service for Nelan Bahlman will be held Saturday, July 10, 2021 at 1:00 p.m. at Ninth Street Church of Christ, 1100 Ninth Street, Ballinger, TX 76821. James Nelan Bahlman, 85, of Winters, passed away Wednesday, December 9, 2020. He was born November 15, 1935, at his family's homeplace on Oak Creek in Runnels County near Winters, TX. He married Celesta Damron on June 8, 1956, in Ballinger, TX. They lived in Robert Lee, TX from 1956 to 1964. In 1964, they moved to Winters, TX, where they owned and operated Bahlman Cleaners until 1986. He also operated a dry cleaners for a time in Coleman, TX. In 1977, they took over management of Spill Brothers Furniture, which they operated until 2001. During his time in Winters, Nelan served on the City Council and as mayor. Nelan was a longtime member and church leader of the Ninth Street Church of Christ in Ballinger. As a church leader, he was instrumental in both domestic and international mission work. In the early 1960s, Nelan helped establish what is now the Namikango Mission in Malawi, Africa. He also played a role in the establishing of the Ukraine Mission Work in the 1990s. In addition, Nelan was a longtime supporter and board member of the Berean Children's Home in Mississippi. Nelan is preceded in death by his beloved wife, Celesta Bahlman, his parents, Otto and Lena Bahlman, sisters, Lera Mae Eager and Willie Ruth Teague, and brothers, JW Bahlman, Melvin Bahlman, and Leon Bahlman. He is survived by two daughters, Tonya Benfer and husband, Keith, of Abilene, and Cheryl Kimble and husband, Allen, of Plano; one sister, Jewell Teague and husband Monroe, of Irving; four grandchildren, Kent Benfer and wife, Jill, of North Richland Hills, Kimberly Benfer, of Abilene, Kristen Kimble, of San Antonio, and Kelli Civello and husband, Brian, of Grapevine; one great-granddaughter, Madelyn Benfer; and many cousins, nieces, and nephews. Nelan had unending love and devotion for his entire family. Due to the Covid pandemic, a memorial service for Nelan will be held at a later date. He will be buried at the Lakeview Cemetery in Winters directed by Winters Funeral Home. In lieu of flowers, the family requests memorials be made to: Moments of Inspiration, P.O. Box 653, Ballinger, Texas 76821 or Meals on Wheels, 717 N. 10th St., Abilene, TX 79601.

The family of Nelan Bahlman created this Life Tributes page to make it easy to share your memories.

** UPDATE** A memorial service for Nelan Bahlman will be held...