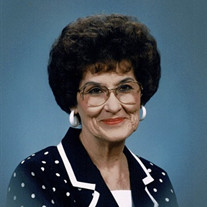 Oneta Faye Parks McKnight, 88, of Winters passed away from the bonds of this earth to dwell with her eternal God on Thursday May 30, 2019. She was born in Winters, Texas on September 20, 1930. She is survived by her children, Troyce and Helen McKnight of San Angelo, Troylene and Jim Lincycomb of Winters, Emily and Scotty C of Winters, Becky and Reggie Boles of Dallas, and Sherry and Darrell Kurtz of Winters; her brother, Carlton (Sonny) and Deloris Parks of Winters; her grandchildren, Kelly McKnight, Tracy and Dave Peltier, Josh and Laura Lincycomb, KaLene Jackson, Mandy and Damian Saiz, Amber and Trey Sawyer, Mitchem and Marcy Boles, Margot and Nate Dickey, McGuire Boles, Dennis Boles, Keegan and Amy Kurtz, Camille Kurtz, Caitlin Kurtz; her fourteen great-grandchildren; and, her one great-great grandchild. She was preceded in death by her husband of almost 70 years, Troy Berton McKnight, in 2017; infant daughters, Sharlinda Sherry and Mary D. McKnight; two grandsons, Brenton Jeremy Kurtz and Jason Lynn Hall; her sister Marie Stephens and her parents Carl and Emily Parks. Oneta was a member of the First United Methodist Church in Winters, and a fervent matriarch and protector of her expansive family. She and Troy began their married life as farmers, and Oneta liked to brag she could out-pick Troy in the cotton fields. She worked as a clerk at the Runnels County Courthouse and later at The Winters Enterprise and John’s International. She was keenly interested in poetry, literature, grammar, and spelling, and she remembered (‘by heart’) poems she memorized in school even to her last days. To her family, she was fondly known as ‘Mom’, ‘Momma’, ‘Nanny’, and ‘Nanny boo boo’ extraordinaire. She loved and was loved by so many, never met a stranger, and could strike up a conversation with anyone in her kind and wonderful way. Her love for the Dallas Cowboys was well known, and, boy, could she cook! She welcomed a multitude of visitors into her house even to the end. A memorial service will be held Saturday, June 15, 2019, 11:00 a.m., at the First United Methodist Church in Winters, Texas. She will be interred at a later date in the Fairview cemetery in Winters. The family requests that anyone who would be so inclined to send donations in Oneta’s name to First United Methodist Church in Winters or Hospice of Ballinger. The family would also like to express their deepest gratitude to all the nurses and aides of Hospice of Ballinger and PA Judy Zuspan (a.k.a. ‘Dr. Judy’, ‘Ole Blue Eyes’).

Oneta Faye Parks McKnight, 88, of Winters passed away from the bonds of this earth to dwell with her eternal God on Thursday May 30, 2019. She was born in Winters, Texas on September 20, 1930. She is survived by her children, Troyce and Helen... View Obituary & Service Information

The family of Oneta McKnight created this Life Tributes page to make it easy to share your memories.

Oneta Faye Parks McKnight, 88, of Winters passed away from the...