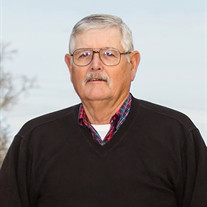 Randall Lee Sneed, 69, died October 26, 2021, at his home. He was born on February 12, 1952, in Winters, Texas. Randall was the son of Louis (LQ) and Vera Lee Sneed. Randall graduated from Winters High School, Class of 1970, as salutatorian. Following graduation, he joined the Air Force (1970-1974) and was stationed in San Antonio, Texas and overseas in Turkey. Upon returning to Winters, he began his career as a farmer and rancher, which he continued throughout the remainder of his life. He married Cheryl Proctor on June 26, 1976. They celebrated 45 years of marriage this year. Randall served as president of the North Runnels Hospital Board for many years, coached Little League baseball and softball, and coached girls' basketball in the summers. He was an active member of the First Baptist Church of Winters where he served as a deacon and on numerous committees. He taught Sunday School classes for children, youth, and adults and was always willing to fill in as a sub. He even preached a few sermons. Randall is survived by his wife Cheryl of Winters; son Steven Sneed of Winters; daughter Stacey Etheredge, husband Dustin, and grandchildren Blake, Brock, and Bowen of Eaton, CO; daughter Susan Sneed of Lubbock; brother Louis Jr. Sneed and Penny of Aledo; sister Barbara Washam and Wilbert of Wichita Falls; sister Rhonda Buchanan and Greg of San Angelo; sister Linda Barr and Glendall of Eula; sister Judy Grun and Marcy of Moro; and many nieces and nephews. Randall is preceded in death by his father and mother, LQ and Vera Lee Sneed. Randall will be fondly remembered by family and friends for his powerful testimony, unfailing work ethic, generosity, and wisdom. He was a lifelong farmer, rancher, and man of God. A celebration of life will be held on November 20, 2021, at 10:30 am at the First Baptist Church of Winters. Memorial gifts may be made to the First Baptist Church of Winters or Hospice of the Big Country (REHAB).

Randall Lee Sneed, 69, died October 26, 2021, at his home. He was born on February 12, 1952, in Winters, Texas. Randall was the son of Louis (LQ) and Vera Lee Sneed. Randall graduated from Winters High School, Class of 1970, as salutatorian.... View Obituary & Service Information

The family of Randall Sneed created this Life Tributes page to make it easy to share your memories.