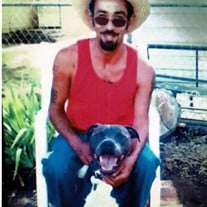 Ricky Ortiz, age 53, of Winters, passed away peacefully Saturday, November 17, 2018, surrounded by his family. He is preceded in death by his parents Domingo and Aurora Ortiz and brother Daniel Ortiz. He was born in Winters, Tx June 26, 1965 and worked most of his life as a welder. He spent a lot of his years coon hunting with his brothers and nephews. He enjoyed spending time with his friends and family B-B-Qing and listening to music. One of the last treats he enjoyed was his all time favorite, oxtail and cow tongue. The love he had for his grandkids was like no other; family was very important to him. He married Darlene Bowden on September 8, 1989. They spent 17 wonderful years of marriage together raising their family. Later in life following a separation, he entered into a relationship with Ophelia Lopez who he spent the remaining years of his life with. He is survived by his children: Wendy Cabrera and husband Juan of Port Lavaca, Dustin Frazier and wife Lori of Wichita Falls, DoraLee Garsee and husband Brent of Plano, Ricky Joel Ortiz and wife Lori of Winters, Alia, Hailey, and Maryann Renfro of Winters; siblings: Mary and Andy Silva of Abilene, Mingo and Sylvia Ortiz of Winters, Frank Ortiz of Winters, Raymond and Millie Ortiz of Winters, Dora and Danny Martinez of Winters, Maggie and Mack Walker of Winters, John and Crystal Ortiz of Winters, and Oscar Ortiz of Winters, grandchildren: Denise Darilek, JJ Cabrera, Erin Cabrera, Isaac Ochoa, Mariah Daniels, Autumn Ortiz, Belle Garsee, Emma Frazier, Ricky Ortiz Jr, Logan Frazier, Julian Ortiz, Kat Garsee, Tyler Frazier and Journey Rodriguez; and great-grandchildren: Zylah Darilek and Zephaniah Darliek. He was dearly loved by his numerous nieces and nephews. A prayer service will be held at 6:00 p.m. Tuesday, November 20, 2018 at the Winters Funeral Home. Funeral Services will be held at 1:00 p.m. Wednesday, November 21, 2018 at the First Baptist Church of Winters with burial following at Lakeview Cemetery under the direction of the Winters Funeral Home.

Ricky Ortiz, age 53, of Winters, passed away peacefully Saturday, November 17, 2018, surrounded by his family. He is preceded in death by his parents Domingo and Aurora Ortiz and brother Daniel Ortiz. He was born in Winters, Tx June 26, 1965... View Obituary & Service Information

The family of Ricky R Ortiz created this Life Tributes page to make it easy to share your memories.