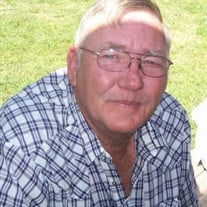 William (Billy) Royce Meares, Jr., 69, passed away on Sunday, June 14, 2020 in San Angelo, Texas surrounded by his girls. Funeral services will be held in Winters, Texas on Wednesday, June 17, 2020 at 2:00 pm at First Baptist Church of Winters with burial following in Lakeview Cemetery. Billy was born on August 18, 1950 to Royce and Betty Gay Meares in Levelland, Texas. After Betty Gay passed away, Billy was blessed to have the love of another mother, Jo, and his two siblings JoBeth and Danny. He was raised in Monahans and Levelland. After graduating from Monahans High School in 1969, Billy spent over 40 years working in the oilfields of West Texas. The last years of his life were spent farming and cattle ranching near Bronte. Billy was a proud, loving, and devoted dad to his two girls. He considered them his best friends and they felt the same. Billy was also an amazing “Da” to his eldest grandson Mason. Mason was his Da’s pride and joy. In the last few years, Billy was blessed by three more grandchildren. Billy truly enjoyed the simple things in life. He loved daily phone calls with his girls, a good game of SkipBo, classic rock music, and his cows. He especially looked forward to any time he could sneak away with Mason. Billy was preceded in death by his mothers, Betty Gay Meares and Jo Meares. He is survived by his father Royce Meares of Winters, daughters Candace and Sabrina Meares of San Angelo, grandson Mason and three special grandchildren of San Angelo, sister JoBeth Milam and husband John of Waco, brother Danny Huffman of Robinson, niece JoAnna Guerrero, husband Victor and son Max of Los Angeles, California, “bonus” daughter Wendy Rodriguez of Mertzon, Texas, and numerous, beloved cousins. Pallbearers are Mason Meares, Danny Huffman, Brandon Poehls, Roman Rodriguez, Rodney Robertson, and Ricky Green. Honorary Pallbearers are John Milam, Terry Poehls, Shane Gleghorn, David Gentry, Turner Lee, and Houston Hendryx. The Meares family would like to extend their thanks to Terry Poehls, Maria & Houston Hendryx, Wendy & Roman Rodriguez, Reba & Ricky Green, and Nikki & Kevin Russwurm for their caring and helpful actions over the course of Billy’s illness. A very special thank you to Dr. Norma Cerna for her unwavering kindness and dedicated care of Billy over the past fifteen years.

The family of William Meares created this Life Tributes page to make it easy to share your memories.