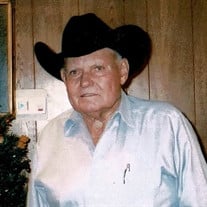 William Roscoe Morrison, 83, went to be with his Lord and Savior on March 27, 2019. Roscoe was born on April 1, 1935 to Charlie and Augusta Morrison in Winters, Texas. His parents came to the Winters area in 1905 and began farming. Roscoe continued farming that same farm well into his seventies. Roscoe attended Mazeland School from 1941-1945. He then attended Wingate and Winters schools. He graduated from Winters High School in 1952. He married the love of his life, La Nelle Houston, on May 24, 1956. They celebrated 62 years of marriage together. Roscoe had one daughter, Robbie Morrison Bishop, who was the light of his life. Roscoe had a passion for farming and he loved tractors. He began farming with his own tractor at the age of 15. He enjoyed hunting with friends for many years. Roscoe enjoyed traveling with La Nelle. Their favorite destination was a log cabin they had built in Taylorsville, NC in 1986. Roscoe's parents originated from North Carolina and Roscoe has family remaining there today. Roscoe served on the Winters I.S.D. school board for 9 years. He enjoyed those years and often talked about traveling with the school board. Roscoe also served for years as President of the Farmers Union and traveled around the state and even to Washington D.C. advocating for farmers. Roscoe worked at a cotton gin in Lubbock in his early years and he continued as a cotton buyer for many years all while maintaining the farm back in Wilmeth. He also enjoyed daily coffee and talk with his closest friends. Roscoe was baptized on February 13, 1966. He attended the Wingate Baptist Church for fifty years until his health didn't allow him to go anymore. Roscoe is preceded in death by his father Charlie Morrison, his mother Augusta Morrison, 13 beloved aunts and uncles and numerous cousins from N.C. Also, his bulldog Gramps. Roscoe is survived by his loving wife La Nelle Morrison, his daughter Robbie Morrison Bishop and husband Dane, two step granddaughters Jamie Bishop and Staci McNeal and family, one granddaughter Krystal McCool and husband Kevin and one great granddaughter Amelia McCool. Roscoe is survived by cousins Michael and Kathy Fox and family, Rachel and Bill Brendle and family, Amy and Clay Roberts and family, Trish Morrison and family, Timothy Sain, Melissa McCloud, Harley Muse, and numerous other family of N.C. He is also survived by Manuel Martinez, whom he thought of and loved as a son, and numerous lifelong friends including Quincy Traylor, Richard Hamilton, Leo Minzenmayer, Tom Tharp, and Charlie Plumbley. Services for Roscoe will be held on Sunday, March 31, 2019 at 2:30 pm at the Winters Funeral Home Chapel, followed by burial at the Wilmeth Cemetery. Memorials can be made to the American Heart Association.

William Roscoe Morrison, 83, went to be with his Lord and Savior on March 27, 2019. Roscoe was born on April 1, 1935 to Charlie and Augusta Morrison in Winters, Texas. His parents came to the Winters area in 1905 and began farming. Roscoe continued... View Obituary & Service Information

The family of William "Roscoe" Morrison created this Life Tributes page to make it easy to share your memories.

William Roscoe Morrison, 83, went to be with his Lord and Savior...